For Anyone with a Gender: A Review of Persistence: All Ways Butch and Femme, Edited by Ivan E. Coyote and Zena Sharman

Posted on July 6, 2012 by CaseytheCanadianLesbrarian 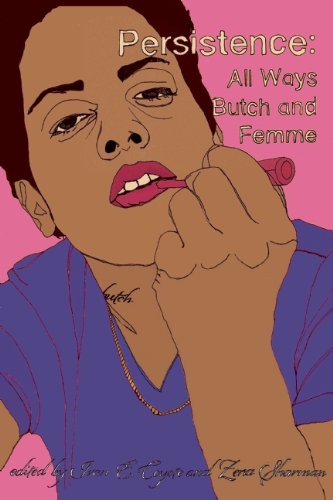 Edited by the impressive team of Ivan E. Coyote and Zena Sharman—an adorable married couple (see photo below)—the collection Persistence: All Ways Butch and Femme (2011) certainly does live up to its name.  It’s refreshing to see an anthology reflect a remarkable diversity of perspectives on these two loaded concepts and identities.  It’s exactly what you’d expect from the Vancouver-based Ivan—a storyteller and writer—and Zena—a radical government bureaucrat and gender researcher, and from the fantastic queer-friendliest publisher Arsenal Pulp Press.  I thoroughly enjoyed some pieces by queer writers I already liked, such as S. Bear Bergman, Ivan E. Coyote, and Amber Dawn and discovered some whose work I’ve already been prompted to explore more: Zoe Whittall, Anne Fleming, and Bevin Branlandingham.  All of these writers except Branlandingham happen to be Canadian—coincidence?  I think not.  But seriously, there’s a decent amount of Canadian contributors as well as excellent ones from elsewhere.  This is definitely a queer collection not be missed.  The Lambda Literary Foundation thought so too, but unfortunately Persistence didn’t win in the LGBT anthology category (for the record, neither did the amazing Sovereign Erotics: A Collection of Two-Spirit Literature, and this book is only the second specifically Indigenous LGBTQ/two-spirit anthology ever published in English).

Back to Persistence: Whittall’s “A Patch of Bright Flowers,” a butch-femme romance story, is an exceptional contribution: it’s endearing and cynical, sweet and rough, all at the same time.  Dawn’s exploration of the impact that sex work has had on her relationships, constructed as a letter written to all the butches she loved “between 1995 and 2005,” is heartbreaking but also gorgeous and eventually hopeful.  Branlandingham investigates and unpacks the idea of femme women’s so-called high maintenance; she challenges queer folks to think about anti-femme bias in queer communities and its links to misogyny.  Bergman, whose writing is always turning masculinity around in queer circles, writes of the nuances of trans men and butches and how polyamourous relationships are different with husbands and with boyfriends.  Fleming’s essay eloquently moves between different moments in her butch childhood and adolescence, finally settling on the intricacies of her gender identity and its relation to parenthood: she’s “a dad called mum.” And of course there’s Ivan Coyote, who writes a beautiful, tear-jerker of a tribute to femmes called “Hats Off” that ends the collection; if you don’t already know and love her work, well, what kind of a queer are you??

While I appreciated the diversity of the takes on butch and femme (and all in between), especially those that discussed the identities in relation to ability, race, size, and class, I thought Persistence was a bit uneven in terms of generation.  Joan Nestle, the editor of the groundbreaking The Persistent Desire: A Butch-Femme Reader published in 1992, writes the foreword for Persistence and she declares that the book represents “the voices of another generation, of other cultural positions, new possibilities of gender discourse, and erotic adventuring” in comparison to her earlier collection.  I was expecting, then, a butch-femme anthology comparable to S. Bear Bergman and Kate Bornstein’s Gender Outlaws: The Next Generation, which I’ve recently read and enjoyed: a collection of more recent voices.

Ivan and Zena at their wedding last summer.

There are, however, a few contributors to Persistence that are of Nestle’s rather than Coyote and Sharman’s generation (Jewelle Gomez and Jeanne Córdova are two).  This imbalance confused me: the effort on Coyote and Sharman’s part to pay tribute to femmes and butches before them and to Nestle in particular is admirable, but there weren’t enough voices of older generations in their anthology to construct an inter-generational dialogue.  The few writers who are queer elders, then, seemed a bit out of place.  Also in terms of diversity, it would have been nice for the anthology to have a wider range in terms of genre: most of Persistence is personal essays.  The few fiction and poetry pieces were a welcome change and I wished there were more of them!

These minor points aside, I can’t recommend this book highly enough, especially because, as Danika puts it in her lesbrary review: “If I could guarantee one thing, it’s that at least one entry in this collection will piss you off.”  The diversity of opinions sandwiched between the covers of Persistence pretty much assures that. I see this as a strength rather than a weakness.   If you’re a person with a gender–butch, femme, or both, or neither, I’d highly recommend Persistence to invigorate, infuriate, and astound you—perhaps all at once, if you’re lucky.

[*note: as of 2014, Ivan Coyote is using they as a pronoun and identifying as trans]

Known in some internet circles as Casey the Canadian Lesbrarian, Casey Stepaniuk is a writer and librarian who holds an MA in English literature. She lives and works in the unceded territory of the Snuneymuxw First Nation (Nanaimo, BC). Topics and activities dear to her heart include cats, bisexuality, libraries, queer (Canadian) literature, running, and drinking tea. She runs the website Casey the Canadian Lesbrarian, where you can find reviews of LGBTQ2IA+ Canadian books, archives of the book advice column Ask Your Friendly Neighbourhood Lesbrarian, and some other queer, bookish stuff. She also writes for Autostraddle. Find her on Twitter: @canlesbrarian. Some of her old reviews, especially the non-Canadian variety, can be found at the Lesbrary.
View all posts by CaseytheCanadianLesbrarian →
This entry was posted in Anthology, Canadian, Fiction, Ivan E. Coyote, Lesbian, Non-Canadian, Non-Fiction, Poetry, Queer, Trans, Trans Masculine, Transgender and tagged Arsenal Pulp Press, Book Review, Canadian, Canadian authors, Ivan Coyote, lesbian authors, Lesbian Fiction, Queer Fiction, Zena Sharman. Bookmark the permalink.

8 Responses to For Anyone with a Gender: A Review of Persistence: All Ways Butch and Femme, Edited by Ivan E. Coyote and Zena Sharman