A Collection at Once Tough and Tender: A Review of Kristyn Dunnion’s The Dirt Chronicles

Posted on July 27, 2012 by CaseytheCanadianLesbrarian

In The Dirt Chronicles, Kristyn Dunnion writes brilliant, moving stories about a diverse crowd: anarchist punks, dumpster-diving freegans, a First Nations lesbian teenager, queer brown kids in foster care, trans sex workers, middle-aged ostensibly straight men with intense homoerotic cross-cultural bonds, and tireless activists living in abandoned buildings.  The subjects of Dunnion’s stories are the kinds of people you don’t usually come across even in queer literature, those outlaws who are on the fringes of sub-cultures.  The Dirt Chronicles is a stunning collection of often sexy but also challenging literary stories: challenging especially if you’re one of those “bougie poseurs” or the “gay-lesbian enemy—mainstreaming homos,” as one of the characters describes some party guests who want to listen to Beyonce.  Dunnion is obviously familiar with a number of these worlds, her bio describing her as a “Lady punk warrior” and the bassist for a dykemetal band Heavy Filth—awesome!—but her imagination is fierce: she writes extremely convincingly from point of views quite different from her own, like that of a middle-aged divorced male metalhead and a socially awkward office worker who falls in love with a buff Eastern European bike courier.

As you move farther along in the collection, you begin to encounter the same characters, and realize that Dunnion is weaving all the stories of these outlaws together.  There’s a simultaneous change in tone and structure that occurs about half way through the book, that is quite disorienting.  I really enjoyed the first section, where the short stories stood alone and were centred around small, meaningful moments; so, I found my expectations thwarted when the book became more of a novel told from different characters’ perspectives.  I actually liked the book less as the story became more focused on a larger narrative; it became more plot than character driven, and I found that I missed the intense focus on relationships, desire, and seemingly insignificant interactions that characterized the first few stories.  While the characters in these earlier stories are the same kinds of rough outsiders that Dunnion focuses on throughout The Dirt Chronicles, the tone is much lighter, and the perspective more hopeful. 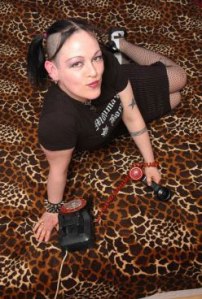 As I wrote when reviewing Anne Fleming’s short story collection Pool-Hopping, I think short stories are highly underappreciated and so I was excited to find another excellent writer publishing them.  Dunnion really excels in the first few proper short stories of The Dirt Chronicles, where she peels back the layers of grime and toughness to expose the pink, vulnerable side of characters whom you might least expect to be quite so tender. In fact, the first four stories were my favourites (even though these ones are all actually about queer men, including a gay trans guy).  The first story, “Migrant,” for example, follows a touching friendship—peppered with homoeroticism—between a middle-aged divorced man and a Mexican migrant farm worker.  Besides dealing with a topic often ignored—migrant farm labourers in Canada— the story really keenly and vividly evokes the emotions and perspective of the main character, whose life is revived by his relationship with the closeted Geraldo.

The portrayal of the villain in the later linked stories, a corrupt cop nicknamed “the King,” is a bit heavy-handed and simplistic, given the complex characterization Dunnion shows she is clearly capable of elsewhere in the collection; don’t get me wrong, I certainly know there are a lot of problems with our justice system and that there are some awful police officers out there in Toronto and elsewhere, as the G20 protests showed us, but complicating the cop figure would have made The Dirt Chronicles more realistic and challenging than it already is.  emily m. danforth’s portrayal of the leader of the ex-gay camp in The Miseducation of Cameron Post is a great example of a complex villain whom you are not allowed to simply hate, because the writer makes it more complicated than that (danforth’s novel is reviewed by me here and by danika here).  Those are the really salient kinds of oppression we’re up against, and the most challenging kind.  It worries me when oppression is condensed into one figure like it is in the corrupt cop and the larger social context takes the backseat.

Overall, I enjoyed The Dirt Chronicles, although it is disappointing to like a book less as you move through it.  I just wished the collection could have decided exactly what it was, and what its tone was going to be: it’s jarring to move from stories about unexpected desire and unlikely friendships to some pretty heavy narratives about corrupt police officers, rape, murder, and sex trade (it would have helped if I had read this review on the lesbrary first, actually, so I was more prepared).  That said, some of the stories totally blew me away and are all really vividly and beautifully told.  I really appreciated reading about the kinds of queer people who are often ignored: sex workers, gay-identified trans people, Indigenous queers, and homeless queer youth, especially from a writer who really brilliantly captures their unique voices.

Known in some internet circles as Casey the Canadian Lesbrarian, Casey Stepaniuk is a writer and librarian who holds an MA in English literature. She lives and works in the unceded territory of the Snuneymuxw First Nation (Nanaimo, BC). Topics and activities dear to her heart include cats, bisexuality, libraries, queer (Canadian) literature, running, and drinking tea. She runs the website Casey the Canadian Lesbrarian, where you can find reviews of LGBTQ2IA+ Canadian books, archives of the book advice column Ask Your Friendly Neighbourhood Lesbrarian, and some other queer, bookish stuff. She also writes for Autostraddle. Find her on Twitter: @canlesbrarian. Some of her old reviews, especially the non-Canadian variety, can be found at the Lesbrary.
View all posts by CaseytheCanadianLesbrarian →
This entry was posted in Canadian, Fiction, Gay, Indigenous, Kristyn Dunnion, Lesbian, Queer, Sex Work, Short Stories, Toronto, Trans, Trans Masculine, Transgender and tagged Arsenal Pulp Press, Book Review, books, Canadian, Canadian Fiction, Class, Lesbian Fiction, literature, Punk, Toronto. Bookmark the permalink.

5 Responses to A Collection at Once Tough and Tender: A Review of Kristyn Dunnion’s The Dirt Chronicles