A Collection at Once Moving, Inventive, and Funny: A Review of Gay Dwarves of America by Anne Fleming

Posted on November 29, 2012 by CaseytheCanadianLesbrarian 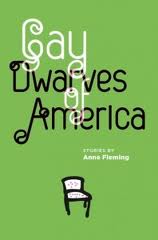 Have I mentioned lately that I love Anne Fleming’s writing? (I would say I love her, but we’ve never met and are facebook friends, and that feels a bit awkward).  Reading her recently released short story collection Gay Dwarves of America was a bittersweet experience for me, because I knew once I finished it, I wouldn’t have anything new to read by her until her next book came out.  As in Fleming’s other work, Pool-Hopping and Other Stories (her first collection that was shortlisted for the Governor General’s Award for Fiction) and Anomaly (a critically acclaimed novel born out of one of the stories from Pool-Hopping), Gay Dwarves—I’ll get to this awesome title momentarily—peels away the layers of everyday people in everyday situations to reveal their surprising peculiarities.  Or perhaps these peculiarities are not so shocking, considering what we all figure out when we get to know new folks: everyone’s pretty weird, right?  Fleming shows us that, in fact, it’s our eccentricities, in all their diverse glory, which make us human; in fact, they’re what we all have in common.

One thing that is very unique about Fleming’s stories, whose topics and characters are quite varied, is that even the ones that focus on heterosexual characters don’t exist in a vacuum outside of queerness.  In the first story “Unicycle Boys,” for example, a 17-year-old woman accompanies an old friend to his grade thirteen formal.  Although this guy Curtis is decidedly below her in high school social terms and is what she calls “a mercy date,” she is somehow perturbed when she discovers that he invited someone else before her who clearly rejected him; this other woman turns out to be a lesbian, something which Curtis discovers when she turns up at the formal dressed in a tux with another woman as her date.  The four of them make an odd-ball outsider foursome at the dance and the protagonist looks back at this strange night thinking: “I haven’t, actually, found anyone exactly my equal to love, or equal to my love, or whatever I’d meant in my maudlin state.  It’s always him loving me too much or me loving him too much, and sometimes I think I should have snapped up Curtis when I had the chance.  But seventeen.  How could I have known?”

The title story, “Gay Dwarves of America,” also features straight characters, but the context of the story is undeniably queer.  Two college roommates, John and Pen, are brainstorming the strangest website ideas, and, you guessed it, “Gay Dwarves of America” is the winner.  When these guys actually create the website, though, they receive a heart-felt message from a mother who is looking for advice about her son who’s a little person and whom she thinks might be gay.  John becomes emotionally invested in this woman’s dilemma despite himself, exchanging emails with her and giving her advice on how to make her son comfortable enough to come out.  There’s a fascinating scene where John lets himself imagine kissing and desiring his friend when they’re out playing pool and discussing “Dwarf-Mom” and her potentially gay son:

John made himself think of the next step if there were to be one, of putting his hand under Pen’s shirt on that piece of skin, of putting his lips on muscle.  And then for the length of time between eye-blinks, he felt it.  Pen’s skin would feel thin, almost not there, and everything underneath his skin, muscle and anger and bitterness would be right there under his hand singing like a hydro line… Then the feeling, the knowledge was gone and John felt a weird combination of pride that he could have gone that far, and smugness that no one knew what he’d just been thinking, and shame that his whole life he’d let himself be limited by a word.  What are ya, a homo?  Fuck off, ya homo.

There’s a distinctly homoerotic moment between the two friends later on and a lingering longing when they both move on from their apartment, both of which make you wonder where exactly John stands even though he has a girlfriend.  The story is a brilliant exploration of the thin lines between homophobia/eroticism/sexuality, particularly in relationships between young men.

Two of the stories in Gay Dwarves focus on queer women characters; my favourite of these was “Soyez Blessé,” which takes place pre-same-sex marriage in Canada.  The lesbian protagonist Jayne is dealing with her recent break-up, her brother’s second marriage, her parents’ divorce, and her mother Beth’s subsequent coming out.  Or, what appears to be a coming out:

That was when Jayne asked her what she was doing there.  “I’m having fun,” Beth said, as if Jayne, too, were having fun.  “I mean at Lesbian Week.  You’re not a lesbian.”  “Says who?”  “Says who? Says you for the last forty-five years.”  Her mother shrugged.  “Well, I am one now.  Ask Doreen.”  She gestured to the woman with the large hips.  Doreen couldn’t hear them.  The music was too loud.  Doreen waved.  Doreen, it seemed to Jayne, leered.  Jayne felt sick.  “You can’t be a lesbian.  I’m a lesbian.”  As she said it she realized how ridiculous it sounded.  It was then her mother said for Pete’s sake, it had nothing to do with her.  Jayne said, “No.  No.  You can’t be a lesbian.  If you were a lesbian, you would have made muffins, you would have invited me over, sat me down, fed me muffins, and said, Jayne, I have something to tell you.”  Jayne was on a roll, she shifted gears.  “You’re not a lesbian.  You’re lonely.”

Fleming not only explores diversity in her characters; formally, she’s quite inventive.  For example, “Backstock: The Musical” is exactly what you might expect from the title: a musical (in written form, obviously) about backstock workers at Mountain Equipment Co-op. (Since I’m currently looking for a job, this actually made me think: hey, maybe I should apply at MEC. But that’s beside the point.)  It’s a quirky, silly format, complete with cheesy, repetitive lines that you could never speak and only sing; but, lurking underneath are some sad, sober facts of life, like one of the workers being diagnosed with cancer.  Another story about a family, including a frequently vomiting cat, is told in “puke diaries”: inspired by their cat, the Dad says one day “Wouldn’t it be funny if we all wrote our own puke diaries?  It’d be, like, our lives, through puking.”  It’s hilarious, but the story focused on the times throughout their lives when they’ve thrown up actually does tell us about something profound (and sad) about these people.

There’s an appreciation for and generosity towards all sorts of different kind of  people (queer, straight, male, female, white, Asian, Black) in Anne Fleming’s stories.  They’re the kind of stories that make you want to weep at the same time as you feel lucky to be human.  As one of the characters asks herself when contemplating what a look meant: “I am a human who is true?”  Isn’t that what we’re all asking?

Known in some internet circles as Casey the Canadian Lesbrarian, Casey Stepaniuk is a writer and librarian who holds an MA in English literature. She lives and works in the unceded territory of the Snuneymuxw First Nation (Nanaimo, BC). Topics and activities dear to her heart include cats, bisexuality, libraries, queer (Canadian) literature, running, and drinking tea. She runs the website Casey the Canadian Lesbrarian, where you can find reviews of LGBTQ2IA+ Canadian books, archives of the book advice column Ask Your Friendly Neighbourhood Lesbrarian, and some other queer, bookish stuff. She also writes for Autostraddle. Find her on Twitter: @canlesbrarian. Some of her old reviews, especially the non-Canadian variety, can be found at the Lesbrary.
View all posts by CaseytheCanadianLesbrarian →
This entry was posted in Anne Fleming, Canadian, Fiction, Gay, Lesbian, Queer, Short Stories, Vancouver and tagged books, literature, Pedlar Press. Bookmark the permalink.

4 Responses to A Collection at Once Moving, Inventive, and Funny: A Review of Gay Dwarves of America by Anne Fleming