Posted on December 11, 2012 by CaseytheCanadianLesbrarian 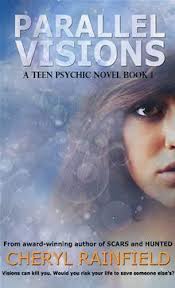 Toronto-based young adult writer Cheryl Rainfield’s recently released teen novel Parallel Visions is a simply written, slim book, but it’s hard-hitting nevertheless.  Within the first few pages, for example, the issue of teen LGBTQ suicide comes up.  The novel not only deals with homophobia, but also sexism, in two of its most explicit forms: sexual assault and intimate partner violence; in fact, it interrogates the intersection of hetero/sexism in its depiction of a secondary lesbian character (bonus points for her also being a woman of colour).  Parallel Visions also deals with more commonplace concerns for teens, such as feeling like an outsider.  Interestingly, Rainfield combines the gritty, realist setting and situations with a thriller storyline, and adds a supernatural twist.

The protagonist along for this breathtaking—literally—ride is Kate, a severe asthmatic whose attacks bring on intense visions.  Unfortunately for her and her friends and family, there are a lot of awful things going on around her and Kate has a hard time resisting the urge to bring on attacks in order to prevent the terrible visions of the future she receives from coming true.  I love the idea that what is initially a debilitating weakness and embarrassing illness/disability (what’s nerdier than asthma?) turns out to be a secret source of strength.  It’s a great message for teens (well, for humans, really): that being different should be a site of power rather than limitation. 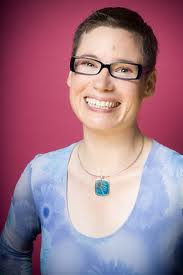 I thought the ideas in the book were great, especially the correlation of Kate’s asthma attacks and her psychic abilities.  What I thought could have been improved was the execution: the novel felt rushed to me, and lacked the character exposition to allow readers to get to know and then care about the characters before the action began full force.  This can be done as a novel unfolds, but in such a short, action-centred book, it simply didn’t happen, and consequently the characters never felt exactly ‘real’ to me.  The (straight) romance that is a side plot to the adventure is cute, but I didn’t feel as excited about it as I would have had there been more anticipation and an account of the characters’ history and personalities.  I also wanted to know more about the lesbian character!

Parallel Visions is a first person narrative written in simple, teenage dialect, ripe with swear words and a lot of the melodramatic, clichéd language you might expect from a teenager. I didn’t particularly appreciate the writing (I had the same problem with Beth Goobie’s  YA novel Hello, Groin actually) but younger teens (13-14) or ones with low reading levels might actually value this style.  Overall, I think the novel is a success for what it wants to achieve: it’s life-affirming while taking on some really serious, important issues, albeit with some hiccups of style and execution along the way.  It’s got serious heart, and that should certainly count for something.

You can buy an electronic copy of Parallel Visions for the super reasonable price of 2.99$, so if you’re into that new-fangled e-reading thing you can’t really lose by checking out the novel.  Check out Rainfield’s website for other options.

Known in some internet circles as Casey the Canadian Lesbrarian, Casey Stepaniuk is a writer and librarian who holds an MA in English literature. She lives and works in the unceded territory of the Snuneymuxw First Nation (Nanaimo, BC). Topics and activities dear to her heart include cats, bisexuality, libraries, queer (Canadian) literature, running, and drinking tea. She runs the website Casey the Canadian Lesbrarian, where you can find reviews of LGBTQ2IA+ Canadian books, archives of the book advice column Ask Your Friendly Neighbourhood Lesbrarian, and some other queer, bookish stuff. She also writes for Autostraddle. Find her on Twitter: @canlesbrarian. Some of her old reviews, especially the non-Canadian variety, can be found at the Lesbrary.
View all posts by CaseytheCanadianLesbrarian →
This entry was posted in Canadian, Fantasy, Fiction, Lesbian, Queer, Toronto, Young Adult and tagged asthma, books, Disability, literature, sexual assault, teen literature. Bookmark the permalink.