Posted on April 9, 2015 by CaseytheCanadianLesbrarian

Here I am with my question. I was originally going to ask for Bottle Rocket Hearts-esque book suggestion, but your first response blog did a pretty great job recommending books in that vein, so thank you!

I am going to ask something sort of related: I have a weakness for unhealthy attachment to the toxic, self-destructive lesbian thing. Sort of a queer take on the “girl trying to tame/fix the broken bad boy” thing. I loved that about Bottle Rocket Hearts, (You) Set Me On Fire, and Herself When She’s Missing by Sarah Terez Rosenblum. Maybe I’ve already read them all, but I thought I’d ask anyway.

Is that short for Marie-Eve? When I was an exchange student in Quebec in high school there were like three girls in my class named Marie-Eve and we always had to refer to them by their full names so they knew which one they were talking to.

Anyway… this question is great. It is certainly testing my lesbrarian skills!  I also love Bottle Rocket Hearts by Zoe Whittall and (You) Set Me on Fire by Mariko Tamaki, so maybe I like this “unhealthy attachment to the toxic, self-destructive lesbian thing” too!  I don’t think you’ve read them all; let me recommend some more!

So, in general the first genre I need to turn you to is lesbian pulp.  I’m by no means an expert, but I do know that this tortured, self-destructive lesbian character figures heavily in many of the lesbian pulp novels of the 1950s and 60s.  For example, you might want to try Ann Bannon’s Beebo Brinker chronicles, a five-novel series that, while often appearing to conform to the homophobic publishing requirements of the day, is actually slyly (and more explicitly as the series progresses) critiquing hetero-patriarchal norms and presenting surprisingly nuanced and positive lesbian characters.  There are, of course, plenty of bad girls, especially those made more and more tortured by girls up and leaving them for the so-called superior charms of men.  Give the old classics a shot!

Don’t Bang the Barista! by Leigh Matthews is a fun page-turner of a book, an updated East Vancouverized contemporary lesbian pulp novel that manages to squeeze in quite a lot, including exactly what you’re looking for: a bad-ass, lady killer type woman named Cass, who is a friend of the main character Kate.  When it seems like something might actually take off with Hanna, Kate’s barista crush, things start to get weird with Kate and Cass.  What is Cass’s problem?  Is she really that concerned about the sacredness of their coffee hangout spot?  Or is it that she actually has the hots for Hanna?  Or is it something else?  Cass is the kind of tough girl who hides her feelings behind a tough exterior and just needs to be tamed by the right lady.  Is Kate that lady?  You’ll have to read to find out.

I’m surprised you didn’t mention The IHOP Papers by Ali Liebegott, because I think it’s kind of the ultimate what-does-this-girl-see-in-this-crazy-tortured-woman.  Goaty, the main character (I can’t remember for the life of me why that’s what she’s called) is in love with this former professor who is really just quite awful, and manipulative, and unethical and all manner of terribleness disguised beneath a veneer of leftist politics, and Goaty just can’t get enough of her.  Why, just, why, Goaty?  The style of this book, and Goaty’s personality, aren’t for everyone; I personally got fed up with the post-post everything and irony and authorial self-awareness, and ultimately, for me at least, lack of genuine emotion and character depth.  But a lot of other people love this book, and it definitely fits the bill, so maybe you’ll like it too! This discussion at Autostraddle will give you some more info to see if you want to read it.

Like The IHOP Papers, The Creamsickle by Rhiannon Argo is set in San Fransisco and full of young punk queers.  I haven’t read it, but it sounds like the queer skater bois sharing an old ramshackle Victorian house / bachelor pad could be described as some of those toxics queers begging to be fixed, or some of the people they date are.  Or maybe both?  In particular, one roomie is “Georgie–a hopeless romantic with a weakness for punk-rock-girls even if they consistently trample her heart.”  It sounds like if you like Michelle Tea’s autobiographical stuff, you’ll like this.  It also seems like it has the same gritty feel as Whittall and Liebegott’s writing.  Even a self-described “50-ish, white, suburbanite” really liked it and explains why in this review on the Lambda literary site. 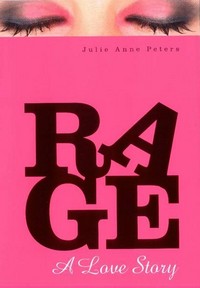 The title of Julie Anne Peters’ young adult novel Rage: A Love Story probably tells you all you need to know about this one.  The plot is exactly what you’re looking for M-E!  I mean, just look at this synopsis:

Johanna is steadfast, patient, reliable; the go-to girl, the one everyone can count on. But always being there for others can’t give Johanna everything she needs—it can’t give her Reeve Hartt.  Reeve is fierce, beautiful, wounded, elusive; a flame that draws Johanna’s fluttering moth. Johanna is determined to get her, against all advice, and to help her, against all reason. But love isn’t always reasonable, right?  In the precarious place where attraction and need collide, a teenager experiences the dark side of a first love, and struggles to find her way into a new light.

Warning, this book definitely needs a trigger warning for its depiction of abusive relationships.  And yes, Julie Anne Peters’ writing can be cheesy, and can have that after school special feel to it, but sometimes YA is like that, and that’s okay.

Alice + Freda Forever: A Murder in Memphis by Alexis Coe is a true historical account of a teenage lesbian relationship which ended in murder in 1892 in Memphis.  Perhaps the woman who ended up on trial for murdering her fiancée is the most extreme version of this trope we’re talking about: I mean, she clearly was so destructive she killed her apparent wife-to-be—who had decided they couldn’t be together—in broad daylight.  She was then put on trial, not because anyone had any doubt that she had done it, but to prove her so-called insanity, which in her review on Autostraddle Riese points out clearly just meant proving she was gay (although they didn’t use that terminology, of course).  This book seems just the right amount of dark and intrigue.

In the romance / erotica zone, it seems like you should check out Meghan O’Brien, in particular her novels Battle Scars, Thirteen Hours, and The Night Off.  The difficult woman in Battle Scars is

[r]eturning Iraq war veteran Ray McKenna [who] struggles with battle scars that can only be healed by love.

Ray McKenna returns from the war in Iraq to find that she had attained unwanted celebrity status back home. As the only surviving American soldier of a well-publicized hostage crisis, she is the center of attention at a time when all she wants is solitude. Struggling to overcome the fear and anxiety that plague her, she relies on her psychiatric therapy dog Jagger to help her through the vicious symptoms of PTSD.

Of course, there’s a veterinarian with issues of her own who can heal her and help her move forward from her troubled past! 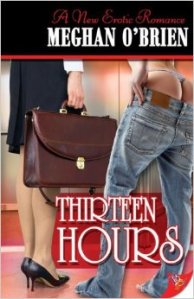 Thirteen Hours and The Night Off are both best described as erotica, so expect a ratio of lots of sex versus plot development, but they both feature some kind of so-called bad girls—both sex workers, actually—paired with women who are decidedly…not bad girls (one is a lonely workaholic and the other a control-freak).  Thirteen Hours gets its name from the fact that its two lovers end up trapped in an elevator for guess how long. Oh, the possibilities!

Readers! Any other ideas for books featuring do-gooder queer girls trying to fix broken tortured girls?  I couldn’t find any by writers of colour (other than the one M-E has already read), so any recommendations there would be much appreciated!

Known in some internet circles as Casey the Canadian Lesbrarian, Casey Stepaniuk is a writer and librarian who holds an MA in English literature. She lives and works in the unceded territory of the Snuneymuxw First Nation (Nanaimo, BC). Topics and activities dear to her heart include cats, bisexuality, libraries, queer (Canadian) literature, running, and drinking tea. She runs the website Casey the Canadian Lesbrarian, where you can find reviews of LGBTQ2IA+ Canadian books, archives of the book advice column Ask Your Friendly Neighbourhood Lesbrarian, and some other queer, bookish stuff. She also writes for Autostraddle. Find her on Twitter: @canlesbrarian. Some of her old reviews, especially the non-Canadian variety, can be found at the Lesbrary.
View all posts by CaseytheCanadianLesbrarian →
This entry was posted in ask your friendly neighbourhood lesbrarian, BDSM, Canadian, Erotica, Fiction, Non-Canadian, Young Adult and tagged ask your friendly neighbourhood lesbrarian, books, erotica. Bookmark the permalink.