“But how I suddenly loved the question”: Looking for Answers about Love, Spirituality, and Family in Sigal Samuel’s THE MYSTICS OF MILE END

Posted on April 27, 2016 by CaseytheCanadianLesbrarian 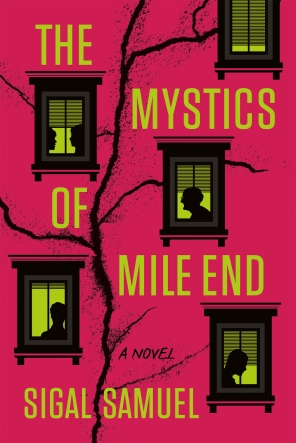 The Mystics of Mile End by Sigal Samuel is, above all, an amazing book, such a sure-footed, beautifully written novel that it’s hard to believe it’s her first. It’s one of those books that was so good I’m not quite sure where to begin describing it. But, I’ve got to try. Here goes! [By the way, I’m going to keep hidden some of the details that are even on the back of the book, because in my opinion they are spoilers. So if you really want to get the full effect of this novel, I suggest NOT reading the back cover!]

At its core, The Mystics of Mile End is a story about a family. Lev and Samara Meyer live with their father David in Montreal’s Mile End neighbourhood, a curious mix of Hasidic Jews (a branch of Orthodox Judaism) and young hipsters. Samuel lovingly and richly sets the scene of Montreal; you can feel the thick humid summer air, smell the coffee at funky neighbourhood coffee shops, and hear the Hasidic Jews call to each other in Yiddish and Hebrew as they walk in groups to and from synagogue.

David is a cynical professor of Jewish mysticism at McGill university, but has rejected the Orthodox faith in part because of his wife’s early death; as children both Lev and Samara have to hide their interest in Judaism and spirituality, Samara even keeping her preparations for her bat mitzvah—which is happening one year later than it should—a secret. Lev and Samara share a close bond, a comfortable intimacy that does not need to be spoken, which only makes their distant father feel more separate from them.

Despite David’s avowed disinterest in religious practice, however, his children begin to notice strange behaviour as he (and they) grow older that suggests his spiritual, in addition to his intellectual, interest in Jewish mysticism is returning. The concept David is becoming increasingly obsessed with is the Kabbalistic Tree of Life. The Tree of Life—as I’ve learned from this novel—is a mystical symbol representing different stages of enlightenment: at the bottom is ani (“I,” associated with the ego or unified self) and at the top is ayin (“nothingness,” associated with the annihilation of the ego), with many layers in between. The study of the Tree of Life and the consequent urge to ascend the Tree are supposed to be restricted to scholars over the age of forty, because, as the neighbourhood’s wise teacher says, young people who have recognized the meaning of the Tree’s holy vision have been “consumed by fire.” In other words, they go crazy.

Eventually, Samara sets out on the same dangerous path as her father, to disastrous results, and it is up to her family and friends—including her girlfriend Jenny, Lev’s best friend Alex, and neighbour and Holocaust survivor Mr. Glassman—to save the Meyers and bridge the communication gaps that keep them apart and threaten to destroy their family.

If The Mystics of Mile End sounds complex, that’s because it is. It’s a profoundly spiritual but also intellectual novel, the kind of book that is full of emotional truths that ring true. While you don’t have to know much about Judaism, Kabbalah, or the Tree of Life to enjoy this book—I certainly didn’t—Jewish readers and/or those with a special interest in spirituality and mysticism will certainly connect with The Mystics of Mile End. Even if you don’t think of yourself are a spiritual person or someone attracted to spirituality, though, this novel has a lot to offer about human relationships, family, grief, queer identity, and, as trite as it might sound, the meaning of life. Samuel wonderfully sketches out some the ugly and beautiful truths of life and the similarly ugly and beautiful things human beings say and do.

What I really loved about this book, in addition to its musing about the nature of our world and life itself, was how Samuel sketched such complex, fascinating, authentic characters that were allowed to be unlikable sometimes, allowed to be contradictory, allowed to be sympathetic despite everything. The novel passes over a decade of time, and through the minds of Lev, David, and Samara, taking on their first person perspectives before moving onto an omniscient standpoint from the point of view of the neighbourhood itself. Changing viewpoints like this is a challenge for veteran writers, but Samuel totally triumphs. Here’s an excerpt from 10-year-old Lev’s section, talking about his sister’s Torah reading from her bat mitzvah:

And there it was, the weird something in her voice. It was not too fast or too quiet but slow and steady, as if she had all the time in the world, as if it was just for her, just for this moment, that the whole world had been created. I closed my eyes. Inside her voice I could hear each letter, and each silence between each letter, and I felt happy and sad and lonely, because in each perfect silence was a smaller, hidden silence, like dolls inside dolls that go on and on forever, and inside the smallest doll I could suddenly see the list curled up, the list of all the reasons, the reasons for my sister’s sadness.

This is David, in the throws of spiritual revelation:

I had wanted an answer. But how I suddenly loved the question, black coffee and the smell of books, and a fine wine on a white table-cloth and the middle-of-the-night bicycle rides, and middle-of-the-way forays into old age, and the pale blue dot on Val’s left leg, whizzing away into infinity, and the new manuscript waiting to be written, and the old silences waiting to be spoken, and the girl attacking her copy of Zizek with a highlighter, and all of the trunk drawers full of jewelry and sadness, and the telephone ringing all day, and my children. My children. And Valérie saying, ‘You might as well stay, if you want to. I mean here, if you want to. You can.’

And finally, Samara, in love:

I touched her face and, one by one, her features sprang away from the cracked wall behind her. I held her by the hip and the grey drained away. I pushed her against the wall and she laughed a vermillion laugh, feral and throaty, her mouth stained red. I kissed her there and the colour spread–she was amaranth, cadmium, cerulean, herliotrope, atomic tangerine–and I pulled her into bed and inside the walls were raining, paint was pouring down, and outside the sky was darkening to a deep pitch black. In the morning, when I held the mirror up to her face, she wept the impossible tears of one who has never known what it is to see her own body.

Whether what piques your interest is the earthly everyday details of Montreal, the transcendental possibilities of Kabbalah, or the eternal struggle to connect with your fellow humans, The Mystics of Mile End will not fail to enchant.

Known in some internet circles as Casey the Canadian Lesbrarian, Casey Stepaniuk is a writer and librarian who holds an MA in English literature. She lives and works in the unceded territory of the Snuneymuxw First Nation (Nanaimo, BC). Topics and activities dear to her heart include cats, bisexuality, libraries, queer (Canadian) literature, running, and drinking tea. She runs the website Casey the Canadian Lesbrarian, where you can find reviews of LGBTQ2IA+ Canadian books, archives of the book advice column Ask Your Friendly Neighbourhood Lesbrarian, and some other queer, bookish stuff. She also writes for Autostraddle. Find her on Twitter: @canlesbrarian. Some of her old reviews, especially the non-Canadian variety, can be found at the Lesbrary.
View all posts by CaseytheCanadianLesbrarian →
This entry was posted in Fiction, Jewish, Lesbian, Montreal, Queer and tagged Kabbalah, Mysticism, Spirituality. Bookmark the permalink.

8 Responses to “But how I suddenly loved the question”: Looking for Answers about Love, Spirituality, and Family in Sigal Samuel’s THE MYSTICS OF MILE END