A Special Lesbrarian Request: Canadian YA with Gay Boys

Posted on September 30, 2016 by CaseytheCanadianLesbrarian

Welcome to a special gay boy version of my queer book advice column! In case you haven’t noticed, Ask Your Friendly Neighbourhood Lesbrarian has officially found a new home at Autostraddle, which I couldn’t be more thrilled about. My first post there is responding to a reader’s request for books with sexy student/professor or May/December lesbian romances. Check it out for recommendations for eight amazing books, including ones by Emma Donoghue, Mariko Tamaki, and classics like The Price of Salt and Desert of the Heart.

I got the question below a little while ago and couldn’t resist answering it, even though it doesn’t fit on Autostraddle, being a website for LGBTQ2IA+ women. This is a special, one-time only deal here on my website! Have a look and see what this gay teen is looking for:

My name is William and I am currently in my final year of high school (Grade 13, victory lap whichever you prefer) And I am re-taking English in order to get a better grade. One of the assignments -the ISP actually- is to read a book written by a Canadian author. Last year I read Water For Elephants (2/10) but I’d rather not read it again…. Ever….

Now I, being a gay teenage boy love LGBTQ literature, finding it more interesting and relatable. However, I’m having a hard time finding anything that fits this category and actually is worth reading which is the pretext upon which I am emailing you today. I was hoping you knew of a book that would work well for my assignment and would actually be a good read (something that I would actually want to read instead of just looking up sparks notes haha)

This is where you come in! That is if you aren’t too busy with your own life and I’m not coming off as a rude insolent child…. Anyway, I was hoping you knew of a book or two that you think would be perfect which you could recommend.

I’m hoping for something with a bit of gay romance maybe supernatural elements. Something that would be good to pick apart not bland and two-dimensional. I know I’m probably asking too much and wasting your time but I would really appreciate the help if you could 🙂

Thanks so much for the question! I am super pumped to find some books that you’ll actually want to read. I too remember being forced to read some stuff in high school English that I found frightfully dull, and I ended up majoring in English and becoming a librarian, so that really says something. In case you don’t already know about it, I have to recommend the majestic Gay YA website, which has master lists of YA books sorted by identity (ace/aro, bi, gay, intersex, lesbian, trans). It’s truly an incredible resource and you should check it out! They have great reviews there and themed lists. Unfortunately they don’t have books that are marked as Canadian, but don’t worry, I found some! Here are some recommendations for YA books by Canadian authors with gay romance and/or characters and enough meat to be able to do a bit of English lit analysis. I’m sorry to say I couldn’t find any with paranormal themes, but I’m pretty sure you’ll find a book or two to love in this list:

Fruit by Brian Francis technically doesn’t have any romance, but it’s a fricking adorable, amazing novel about a young queer boy (or maybe someone who comes out as a trans girl later?). The voice of 13-year-old Peter is incredibly well done: cute and innocent, while being sarcastic and droll at the same time. He starts off the book like this: “My name is Peter Paddington. I just started grade 8 at Clarkedale Elementary School. Six days a week, I deliver the Sarnia Observer and the other day my nipples popped out.” Despite what you might imagine, Fruit is not a typical coming of gayge novel, which is something that I really appreciated about it. He is, after all, only thirteen. The novel deals with fatphobia and has a cast of eccentric, authentic supporting characters like Peter’s terrified driver mom (she never goes anywhere she has to make a left turn) and his funny Italian Catholic friend whose church is “always open, like 7-11.” Oh yeah, also: his nipples talk.

Way to Go by Tom Ryan is set in Cape Breton, NS in the 90s, where 17-year-old Danny is trying to get his shit figured out. The summer before his grade 12 year, a run-in with the cops means he has to get a summer job, something he is definitely not psyched about. To top it all off, his dad won’t stop nagging him about what he’s gonna do after high school and his friends are all wondering why he doesn’t have a girlfriend. Of course, he doesn’t have a girlfriend because he’s gay and he kinda knows it but isn’t ready to tell anyone yet. Over the course of the summer, Danny is gonna figure out who he is and what he wants to do with himself. This is sort of an historical novel (I mean for you Will, in 2016!) so the details about that time and place might be some interesting things to write about for class. Why did the author set the novel in the past, and in a rural place?

Money Boy by Paul Yee is a definitely heavier than the first two books on this list, but on the other hand that means there are lots of issues to discuss in it! It’s about a guy named Ray, who’s a first generation immigrant to Canada from China. Ray knows he should feel lucky: he lives in a suburb of Toronto in a big house with all the latest gadgets and plenty of time for gaming. He’s struggling a bit at school, still feeling like a fish out of water and working on his English, but things get really bad when his dad finds out he’s been cruising gay websites. He gets kicked out and heads for downtown Toronto, where he encounters homelessness, theft, and prostitution. Is Ray gonna have to acclimatize to the harsh realities of the streets, or can he find a way to heal his family relationships?

Swimming in the Monsoon Sea by Shyam Selvadurai is a novel set in the 80s in Shyam Selvadurai’s native Sri Lanka (he now lives in Canada). In essence, it’s about a gay teen guy’s sexual awakening. The setting is a richly described Sri Lanka; in particular, all the natural wonders like the monsoon storms. Swimming in the Monsoon Sea especially focuses on first love, as the main character Amrith finds himself, along with many local girls, enchanted with his visiting Canadian cousin. A sub-plot involves a school play of Othello so that might be an interesting point of analysis for you. Jealousy is a major theme of Othello and it also rears its ugly head in Amrith’s story. There is some beautiful writing in this book, and it might also be a good pick for a school assignment since it was nominated for the Governor General’s Award for Children’s Literature in 2005.

The Dirt Chronicles by Kristyn Dunnion is actually a collection of short stories, not a novel, which gives it the ability to cover lots of different ground (although the stories begin to be interrelated later in the book). Here’s a snapshot of some of the characters in the stories: anarchist punks, dumpster-diving freegans, a First Nations lesbian teen, middle-aged not-so-straight guys, trans sex workers, and activist-squatters living in abandoned buildings. There is no shortage of interesting issues tackled in this book. Most of the people in the stories are outsiders, people that have had to grow tough skin to survive, but Dunnion always finds the vulnerable and tender stuff underneath. There are some really sweet romantic moments between guys in the first four stories, despite the fact that the collection has a dark tone overall. There’s even a gay trans guy in one of them, which is rare to find! 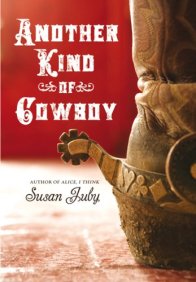 Another Kind of Cowboy by Susan Juby, just like all her books, is infused with the author’s characteristic wittiness (you may have heard of the Alice, I Think books which are by the same author). It stars Alex, a teen growing up on Vancouver Island who just wishes everyone would get that he wants to be a gay cowboy. After all, the guys in Brokeback Mountain did it, right? He’s especially interesting in the “girlier” performance of dressage riding. When he meets the self-absorbed posh Cleo at a unique opportunity to try out dressage, they begin a tentative friendship. But when she starts partying all the time and forgets about her horse, and Alex’s secret—that he’s gay—threatens to come out before he’s ready to tell it, that might mean doom for the both of them, and their friendship. This book is full of cool details about dressage (I had to look up what it was actually!) which might make an interesting essay topic.

Cinnamon Toast and the End of the World by Janet E. Cameron has probably the coolest title of all the books on this list. Like Tom Ryan’s book, it’s set in small-town Nova Scotia. And the end of the world—although it might not look like that from the outside—happens to Stephen Shulevitz while he’s sitting in his own living room watching TV with his (guy) best friend. His life will never be the same: he suddenly realizes he’s fallen in love with exactly the wrong person—his BFF, of course. Stephen’s a great complex character, and the supporting cast is full of multifaceted personalities, like his distant, pot-smoking dad and his overbearing, dependent mother. How is Stephen gonna cope with the end of the world? Should he leave town and hopefully his problems behind? Or should he stick around, and face the end of the world head on?

Known in some internet circles as Casey the Canadian Lesbrarian, Casey Stepaniuk is a writer and librarian who holds an MA in English literature. She lives and works in the unceded territory of the Snuneymuxw First Nation (Nanaimo, BC). Topics and activities dear to her heart include cats, bisexuality, libraries, queer (Canadian) literature, running, and drinking tea. She runs the website Casey the Canadian Lesbrarian, where you can find reviews of LGBTQ2IA+ Canadian books, archives of the book advice column Ask Your Friendly Neighbourhood Lesbrarian, and some other queer, bookish stuff. She also writes for Autostraddle. Find her on Twitter: @canlesbrarian. Some of her old reviews, especially the non-Canadian variety, can be found at the Lesbrary.
View all posts by CaseytheCanadianLesbrarian →
This entry was posted in Asian, ask your friendly neighbourhood lesbrarian, Gay, Kristyn Dunnion, South Asian, Young Adult. Bookmark the permalink.

5 Responses to A Special Lesbrarian Request: Canadian YA with Gay Boys