“the big empty abandoned town hall their heart is echoing inside of”: A Review of Ivan Coyote’s TOMBOY SURVIVAL GUIDE

Posted on February 27, 2017 by CaseytheCanadianLesbrarian

In case you had the wild notion that it wouldn’t be: Ivan Coyote’s latest and unbelievably 11th book is just as great, and possibly greater, than everything they’ve done up until now. If you’ve never read an Ivan Coyote book before, Tomboy Survival Guide would be a great one to start with, as I think it really shows this celebrated writer and storyteller at the height of their powers. But if you’ve read every single book Coyote has written, and seen them multiple times doing live performances like recent collaborations with Vivek Shraya, you will definitely still enjoy this collection of personal short stories. Knowing what to expect with their books is kind of awesome actually: it’s like coming home. I know I always feel comforted and at home, especially as a queer person who has positive relationships with my biological family, a queer person from a rural place, and a queer person with working class roots. I know plenty of LGBTQ2IA+ folks have had bad and sometimes terrible experiences with both biological family and growing up in rural places, but for me the lack of both of those, and working class perspectives, in queer books makes me sad sometimes.

Like in all of their work in various forms, Coyote’s writing in Tomboy Survival Guide is full of their trademark generosity and care. Characters that you might remember from previous collections, like their aunt Cathy who rode horses and was tough as nails when she broke her leg tobogganing with the kids, show up, and you get to meet some new folks, like Barry the sweet straight guy from Coyote’s electrician program who asks for advice on how to help patch things up with his long-time wife who he hasn’t been intimate with in a long time.

Some of the stories are sweet and happy, even when the beginning suggests otherwise, like when Coyote performed at a school in the States and a ton of parents came who were planning to object to their “gay agenda”, and then a Mormon man approaches Coyote after to say how much he was moved by the anti-bullying talk. Some of the stories are funny, such as the one where Coyote recounts an overheard conversation between two kids where one schools his friend for saying the word “fag”; he tells his friend he can’t say that word anymore because he’s “pretty sure my mom is a fag.” Some of the stories are heartbreaking, like the one in which Coyote writes about being an eight-year-old kid choosing to pee outside at Brownies because the women in the women’s washroom at the community centre call you a young man and ask what you’re doing in there. Also, when Coyote answers a letter from someone wondering if they “always knew” and feeling stupid and heartbroken about taking so long to realize who they were. Their response got me right in the heart:

Mostly I think people just want to know they are not alone, that they are not the only one trying to swallow and breathe around the big empty abandoned town hall their heart is echoing inside of. Should I tell them the truth, I wonder? Do they really want to know I feel just as lost as they do, some days? Are two lost people any better off when they find each other?

(My answer to that last question would be a resounding yes). 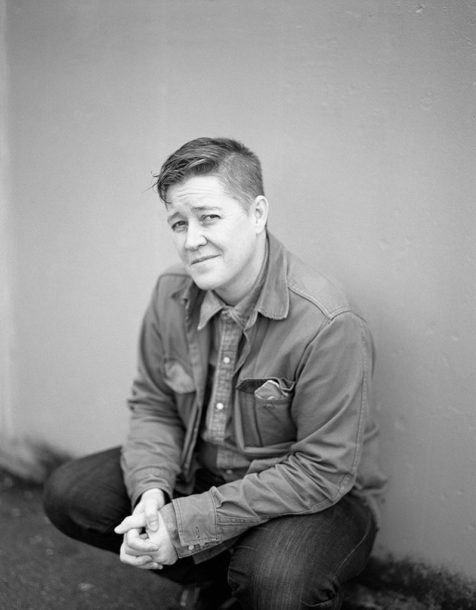 There’s also beautiful writing in this book, like in the above quotation. I’ve always admired Coyote’s easy, unassuming writing (and oral storytelling) style, and Tomboy Survival Guide is no different. But there are also a few downright striking poetic moments, like when they write:

I have never seen you angry. You say you don’t get angry much and I am starting to believe you. Even that night. You could have gotten mad but you didn’t. We both cried and pulled it all apart with only our softest words in the dawn. Started fresh the next morning. When I woke up after we slept for a while I looked at you and I knew. I could be safe here, I thought, and felt my chest ripped open with all the hope escaping me. You slept right through my epiphany and the word love nearly fell out of my mouth fifty times that day.

And then there’s downright laugh-out-loud moments, like when they write:

First off, any statement that begins with ‘no offense but …’ is the ass-crack-smelling handshake of all sentence structure. I mean, it seems friendly enough, but it always leaves you sniffing the air afterwards, and wondering.

One last fun thing: interspersed with the personal stories and anecdotes—some really short stories sometimes only a few sentences long, but still poignant AF—there are song lyrics with chords that you could actually play (!) and tomboy-esque retro-looking drawings and diagrams, like of pliers, different kinds of knots, the inner workings of a toaster, and an old-fashioned compass, among other cool stuff. Both those things were a really fun touch that shook up the usual structure of the book. Another thing is that this book, while not explicitly marketed to young adults, would be a really great choice for them.

Trigger warning for sexual assault in the story “I Believe You” (pages 45-53) and a scene with a short description of what seems like the lead-up to a homo/transphobic physical attack (it’s not, although it’s still scary) in “Journey, Man” (pages 81-86).

Bonus! Did you enjoy this review or find it useful?  Consider supporting me on the Patreon for Casey the Canadian Lesbrarian that I launched last month! Patreon is a site where creators of all sorts of things can make some money via subscription payments from their readers/etc. It can be as little as a dollar a month! Help me continue to be able to devote time to this site and you can win stuff like queer books and postcards with personalized book recommendations! Click on the link for more details and to sign up. I’m currently at $57 a month, working towards my next goal of $75!

Known in some internet circles as Casey the Canadian Lesbrarian, Casey Stepaniuk is a writer and librarian who holds an MA in English literature. She lives and works in the unceded territory of the Snuneymuxw First Nation (Nanaimo, BC). Topics and activities dear to her heart include cats, bisexuality, libraries, queer (Canadian) literature, running, and drinking tea. She runs the website Casey the Canadian Lesbrarian, where you can find reviews of LGBTQ2IA+ Canadian books, archives of the book advice column Ask Your Friendly Neighbourhood Lesbrarian, and some other queer, bookish stuff. She also writes for Autostraddle. Find her on Twitter: @canlesbrarian. Some of her old reviews, especially the non-Canadian variety, can be found at the Lesbrary.
View all posts by CaseytheCanadianLesbrarian →
This entry was posted in Butch, Canadian, Ivan E. Coyote, Queer, Rural, Trans, Trans Masculine, Transgender, Young Adult and tagged Arsenal Pulp Press, books, LGBTQ. Bookmark the permalink.

9 Responses to “the big empty abandoned town hall their heart is echoing inside of”: A Review of Ivan Coyote’s TOMBOY SURVIVAL GUIDE