Posted on May 2, 2017 by CaseytheCanadianLesbrarian

This is my Patreon update for last month, which was pretty bananas! Trying to finish my assignments for the end of the semester at the beginning of April meant I got super behind on all blog-related things. So if you were wondering why my blog posts all appeared in the second half of the month, that’s why!

So, exciting news on the Patreon front is that after hitting the $75 mark last month I was able to make some time to get two really important things done on the blog. The first is that I FINALLY bought my own domain name after having my blog for five years. So instead of the lengthy url including wordpress.com that used to bring you to my blog, it’s now just caseythecanadianlesbrarian.com. Good thing no one snagged that rad domain name in the meantime! The second is that I spent a bunch of time updating my Queer Can Lit Links page, which is a list of authors, blogs, publishers, and bookstores relevant to the queer Can lit world. I’m excited to have added a bunch more authors of colour as well as more trans women and genderqueer authors. Let me know if you think there’s someone/thing missing!

The weird thing is that a few patrons have adjusted their amounts and one person left, so my monthly amount is now below $75 again, haha. I totally get that people have different financial things going on in their lives, so that’s cool. But if you’re wondering why I said I hit the $75 mark and it doesn’t say that on Patreon, that’s why!

Another lucky person got a free queer book this month! Check out what the options were: 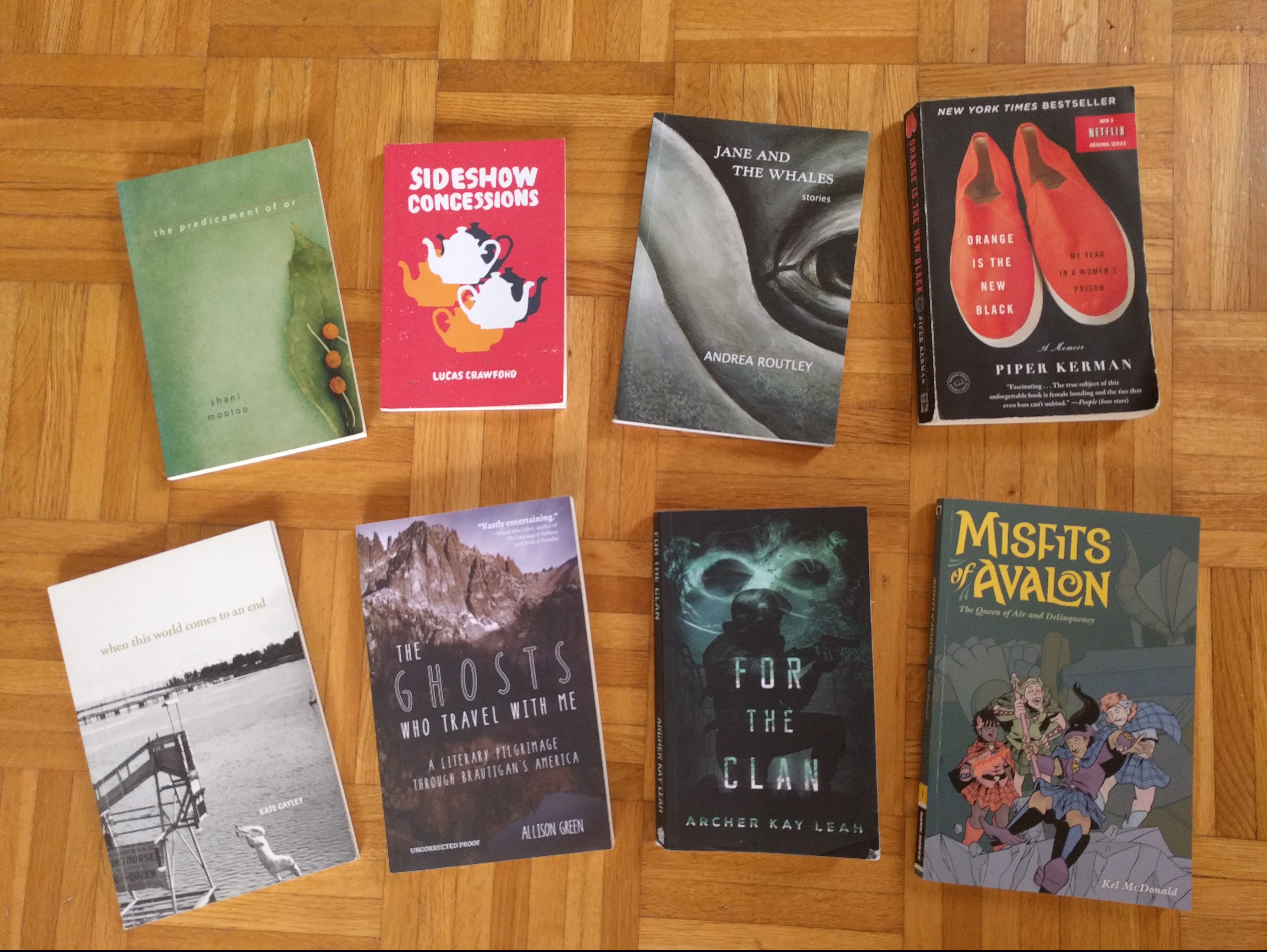 I hope you all enjoyed the content this month, which included Five Queer Canadian New Adult Books for those you in your early twenties or people who enjoy revisiting that time of life/looking forward to it; Six More Canadian Trans Women Writers, which was just as popular as the first installment; an interview with queer reader Kasey Keeley about genderqueer books and queer Canadian favourites; reviews of a (sadly disappointing) bi YA book and an anthology of queer and trans people talking about health and more!

And as always I want to individually thank all of the people who’ve signed up to be patrons. You lovely humans are: Danika, Leigh, Anna Marie, Kim, Jane, Jakelene, Emmet, Madeline, Heather, Rhiannon, Carla, Naz, Laurita, Kirsten, Ashleah, Jason, Jillian, Anton, Shelagh, Priscila, Allison, Ang, James, Seed, Rachael, and Julie! If any of you new (or old) folks are interested in being a part of the Interview with a Queer Reader series, write me at stepaniukcasey [at] gmail.com.

Known in some internet circles as Casey the Canadian Lesbrarian, Casey Stepaniuk is a writer and librarian who holds an MA in English literature. She lives and works in the unceded territory of the Snuneymuxw First Nation (Nanaimo, BC). Topics and activities dear to her heart include cats, bisexuality, libraries, queer (Canadian) literature, running, and drinking tea. She runs the website Casey the Canadian Lesbrarian, where you can find reviews of LGBTQ2IA+ Canadian books, archives of the book advice column Ask Your Friendly Neighbourhood Lesbrarian, and some other queer, bookish stuff. She also writes for Autostraddle. Find her on Twitter: @canlesbrarian. Some of her old reviews, especially the non-Canadian variety, can be found at the Lesbrary.
View all posts by CaseytheCanadianLesbrarian →
This entry was posted in Patreon. Bookmark the permalink.