The Eight 2017 Lammy Winners I’m Most Excited about, Including Three Canadians!

Posted on June 13, 2017 by CaseytheCanadianLesbrarian

The 29th Annual Lambda Awards ceremony happened last night, which means we have a whole new list of acclaimed LGBTQ books to add to your TBR. These are the winners I’m most excited about, some that I’ve read and reviewed already, and others that I’m looking forward to reading soon. Three of them are even Canadian!

Girl Mans Up by M-E Girard

I’m so pleased this Canadian debut novel won in the LGBT Children’s/YA category. I read and reviewed it soon after it came out, and thought it was an important intervention in the sub-genre of queer coming of age YA books. Girl Mans Up is about Penelope, aka Pen, who already knows she’s a lesbian. In particular, she’s a butch/masculine/genderqueer lesbian. What she works toward over the course of the book is demanding recognition and respect from everyone else around her for who she is, cutting out people who won’t, and making new connections with people who will. Along the way she develops a healthy romantic and sexual relationship with a girl named Blake. Pen is a refreshingly real character who makes a lot of mistakes and is not always likable. The characterization of Pen is rich and dynamic, especially as Girard investigates Pen emulating the toxic masculinity of her guy friends as she tries to figure out how to express her gender without oppressing others. Girl Mans Up is a subtle, authentic book that resists flashy portrayals of instant change brought on by dramatic events.

The Devourers by Indra Das

This winner in the LGBT SF/F/Horror category is two tales hidden within one. The Devourers starts on a cool evening in Kolkata, India where a stranger tells a historian named Alok a story of shape-shifters he insists is true. The skeptical historian is then presented with the rest of the narrative, written on scrolls made with human skin. Thus begins an international and century-sweeping saga that investigates gender, sexuality, race, and what it means to be human—and non-human. A half-human, half-shapeshifter who is the product of rape is forced to make a new path while in the frame narrative Alok’s interest in the stranger evolves into something sinister. According to N.K. Jemisin, who reviewed it in her New York Times SF/F column: what readers will really savour in this book is Das’s language, which manages to make cannibalism both disturbing and sensuous.

Mouth to Mouth by Abigail Child

I’m a bit confused about which category this won in, since on Twitter yesterday it was announced as the co-winner of the bisexual fiction award, but on the Lambda website today it lists it as the winner of the bisexual poetry award. Anyway, I’m thrilled that more bi+ books are getting attention at the Lammies. Here’s the publisher’s description: “Mouth to Mouth spans the past two decades focusing on a series of romantic and sexual relationships with both women and men. From inside the sexual whirlwind of these relations and after, Child’s attention to language as embodied material highlights how mediated and multiple layers of desire can be just as thrilling and physical on the page. Even as this divergent collection of writing ranges through these relationships, it also ranges through poetic methodologies, using computers as a writerly id and organizing principle, employing constraints and aleatory processes, and recalling the body’s desires in a constant process of titillation, problematization, and ongoing translation.” 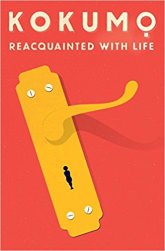 Reacquainted with Life by KOKUMO

This debut collection took home the award in trans poetry. The publisher, the amazing Topside Press, describes the book in this irresistible way: “KOKUMO’s poetry, is what happens when survivors spit sperm and other bodily excretions in the face of those who abuse them. KOKUMO’s poetry, is what happens when Aunt Jemima becomes Rambo. KOKUMO’s poetry, is what happens when the piece of shit you stepped in, corporealizes then knocks you the fuck out. And no! Resilience, has never sounded sexier.” In Kai Cheng Thom’s Autostraddle review, she calls this book “an artistic coup that seizes the queer literary and political establishment by the shoulders and demands a reckoning.” Thom also writes: “With her electric voice, searing gaze and unrelenting dedication to speaking truth, KOKUMO blasts through the bullshit rhetoric and tokenism that too-often engulf queer and trans communities in order to expose the raw struggle to survive at their heart.” I was sold yesterday.

Small Beauty, the winner for trans fiction, is a quiet, meditative novel about family and identity that more than lives up to its name. It’s also by a Canadian author! The main character is Mei, a young queer trans woman who’s dealing with the mysterious death of her cousin and all of the details of arriving in a small town where she’s inherited his house. While she’s there, she uncovers some secrets—like that she isn’t the only queer in the family—and spends a lot of time reflecting on being trans and having white and Chinese ancestry. wilson-yang does an incredible job portraying Mei’s life as both the extraordinary and unremarkable thing that it is, whether it’s dealing with transmisogyny (there’s one scene of transphobic physical assault and some transmisogynist so-called feminist rhetoric), using Mandarin words, or talking about Chinese food. It makes for a beautifully introspective book, which I review here. 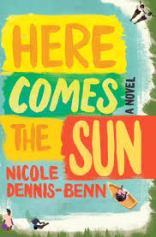 Here Comes the Sun has been on my (audiobook) TBR for a while, and its win in the lesbian fiction section is definitely going to bump it up on my list. Here’s the publisher blurb: “Capturing the distinct rhythms of Jamaican life and dialect, Nicole Dennis-Benn pens a tender hymn to a world hidden among pristine beaches and the wide expanse of turquoise seas. At an opulent resort in Montego Bay, Margot hustles to send her younger sister, Thandi, to school. Taught as a girl to trade her sexuality for survival, Margot is ruthlessly determined to shield Thandi from the same fate. When plans for a new hotel threaten their village, Margot sees not only an opportunity for her own financial independence but also perhaps a chance to admit a shocking secret: her forbidden love for another woman. As they face the impending destruction of their community, each woman fighting to balance the burdens she shoulders with the freedom she craves must confront long-hidden scars.”

The Remedy: Queer and Trans Voices on Health and Health Care edited by Zena Sharman

This is another Canadian winter, this one in the LGBT anthology category. I read this collection late last year, and was surprised by how much I liked it, since the topic has never been a special interest of mine. The Remedy is quite a diverse book. While the majority of the pieces are essays, some leaning to the personal side and others more academic, there is also poetry, a graphic story, lists, and profiles of queer and trans health initiatives. While trans-related stuff gets probably the most attention, quite a variety of the LGBTQ2IA+ spectrum is represented, with a few knock-out essays about asexuality, intersexuality, and bisexuality. I was also happy to see that nearly half of the contributors are people of colour, including more than one Indigenous person! In short, there’s something in here for everyone. Check out my full review here.

Clearly I am failing as a bisexual book blogger since I had never heard of this winner in the bisexual fiction category until it was announced yesterday. It’s supposed to be like Station Eleven but better and it sounds great: “Twenty years ago Lucie Bowen left Marrow Island; along with her mother, she fled the aftermath of an earthquake that compromised the local refinery, killing her father and ravaging the island’s environment. Now, Lucie’s childhood friend Kate is living within a mysterious group called Marrow Colony—a community that claims to be ‘ministering to the Earth.’ There have been remarkable changes to the land at the colony’s homestead. Lucie’s experience as a journalist tells her there’s more to the Colony—and their charismatic leader– than they want her to know, and that the astonishing success of their environmental remediation has come at great cost to the Colonists themselves. As she uncovers their secrets and methods, will Lucie endanger more than their mission? What price will she pay for the truth?” I’m still not sure where the bisexuality comes in though.

Which Lammy winners are you excited about?

Bonus! Did you enjoy this post or find it useful? Consider supporting me on the Patreon for Casey the Canadian Lesbrarian! Patreon is a site where creators of all sorts of things can make some money via subscription payments from their readers/etc. It can be as little as a dollar a month! Help me continue to be able to devote time to this site and you can win stuff like queer books and postcards with personalized book recommendations! Click on the link for more details and to sign up.

Known in some internet circles as Casey the Canadian Lesbrarian, Casey Stepaniuk is a writer and librarian who holds an MA in English literature. She lives and works in the unceded territory of the Snuneymuxw First Nation (Nanaimo, BC). Topics and activities dear to her heart include cats, bisexuality, libraries, queer (Canadian) literature, running, and drinking tea. She runs the website Casey the Canadian Lesbrarian, where you can find reviews of LGBTQ2IA+ Canadian books, archives of the book advice column Ask Your Friendly Neighbourhood Lesbrarian, and some other queer, bookish stuff. She also writes for Autostraddle. Find her on Twitter: @canlesbrarian. Some of her old reviews, especially the non-Canadian variety, can be found at the Lesbrary.
View all posts by CaseytheCanadianLesbrarian →
This entry was posted in Asian, Bisexual, Black, Butch, Canadian, Caribbean, Fiction, Lesbian, list, News, Non-Canadian, Poetry, Queer, Science Fiction, South Asian, Trans, Trans Feminine, Young Adult and tagged lambda literary awards, lammys. Bookmark the permalink.

2 Responses to The Eight 2017 Lammy Winners I’m Most Excited about, Including Three Canadians!