6 New and Upcoming Trans Books You Must Read

Posted on July 24, 2017 by CaseytheCanadianLesbrarian

This big fat anthology due out in September is just so  exciting. It’s a collection of speculative writing from 25 trans writers from the US, Canada, and beyond, from some writers you’ve heard me talk about before, like Sybil Lamb and Trish Salah. There are also a few non-Canadians you might recognize: Imogen Binnie, Jeanne Thornton, Ryka Aoki, and Dane Figueroa Edidi. But there will undoubtedly be others who might be brand new to you, which is one of the best things about Topside Press anthologies. I have a review copy of Meanwhile, Elsewhere that I am very pumped to read. Just looking at the story titles I get all tingly: “Satan, Are You There? It’s Me Laura,” “Using A Treadmill, You Can Run Until Exhaustion Without Moving,” “Themyscira,”—where the Amazons live, in case you haven’t seen Wonder Woman—“Delicate Bodies,” “Heat Death of Western Human Arrogance,” and so many more!

Surpassing Certainty: What My Twenties Taught Me by Janet Mock

I mean, if you like trans books and you didn’t know Janet Mock had a new memoir out, I’m not sure what to tell you. In case you’ve been living under a rock, here’s a bit about Surpassing Certainty. I’m excited about this one, since I thought her first memoir Redefining Realness skipped over a lot from her early years to her present. The book begins just shy of her 20th birthday, when she’s a first generation college student at the University of Hawaii and working as a stripper. The story eventually follows her to New York, where she gets a Masters in Journalism and fights her way into the magazine publishing world. Along the way, relationships and falling in and out of love play a big part in her life. I’m so curious to hear what advice such a successful role model has for that whole “figuring out what you want to do” so many people go through in their twenties.

Margins and Murmurations by Otter Lieffe

If you love dystopian fiction and are looking for gender diversity in the genre, you should definitely pick up Margins and Murmurations, which came out spring 2017. Think The Handmaid’s Tale, but with trans women. The main character is Ash, “a trans woman and healer living in a corner of Europe controlled by a militarized state.” Although Ash’s country used to be a hub of diversity, an economic crash in the 2020s has transformed it into a repressive, state-controlled culture that is decidedly the opposite. Ash and her BFF have escaped to the forest along with other trans folks, queers, and sex workers. When they decide to storm the cities, face their oppressors, and take back what was stolen from them, Ash’s magical ability to time travel—but just throughout her own life—might be the key to their success.

From the Stars in the Sky to the Fish in the Sea by Kai Cheng Thom, Kai Yung Ching, and Wai-Yant Li

This picture book is due out this fall from Arsenal Pulp Press is centred around Mui Lan, a shapeshifter gender variant child. They cant’ decide if they want be a girl or boy, a bird or a fish, or a flower or star. Although school is stuff for Mui, whose classmates don’t understand their in-betweeness, their mother is a constant comfort in her refrain: “whatever you dream of / i believe you can be / from the stars in the sky to the fish in the sea.” If you know Kai Cheng Thom’s writing, you’ll recognize her lush poetic voice even in that small excerpt. The book promises to be a beautiful affirmation of a mother’s love for her child, no matter their identity. 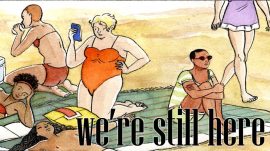 Can you believe up until this point there hasn’t been an anthology devoted entirely to comics written, drawn, and edited by trans creators? Editors Tara Avery and Jeanne Thornton set out to fix that with We’re Still Here. The Kickstarter for the project is ongoing until August 18th, with estimated delivery of books slated for January 2018. Happily, it’s already surpassed its goal, by a lot, which means readers are obviously needing a book like this. Snippets of what to expect are: “Trans women pilot giant robots with impeccable synch ratios,” “Toxic masculinity haunts a friendship between a butch lesbian and trans man,” “A devotional essay about angels beyond gender or understanding,” and more! They have tons of samples of artwork on the Kickstarter page too, check them out!

A Place Called No Homeland by Kai Cheng Thom

While you can’t get Kai Cheng Thom’s picture book yet, in the meantime you can get her poetry collection, which came out April of this year, and reread and reread it until From the Stars comes out, because it is just that good. Her poems have strong roots in oral traditions and spoken word, making it so you can really hear them in your mind and heart. They’re tough and tender meditations on family, race, being trans, femininity, trauma, relationships, community, sex, books, and love. She writes: “All i want is to turn my lungs into a glass instrument and let them sing glory to my sisters” and “dear white gay men: / you are neither the face / of my oppression / nor the hands /of my salvation.” You can read my full review here.

Bonus! Did you enjoy this post or find it useful? Consider supporting me on the Patreon for Casey the Canadian Lesbrarian! Patreon is a site where creators of all sorts of things can make some money via subscription payments from their readers/etc. It can be as little as a dollar a month! Help me continue to be able to devote time to this site and you can win stuff like queer books and postcards with personalized book recommendations! Click on the link for more details and to sign up.

Known in some internet circles as Casey the Canadian Lesbrarian, Casey Stepaniuk is a writer and librarian who holds an MA in English literature. She lives and works in the unceded territory of the Snuneymuxw First Nation (Nanaimo, BC). Topics and activities dear to her heart include cats, bisexuality, libraries, queer (Canadian) literature, running, and drinking tea. She runs the website Casey the Canadian Lesbrarian, where you can find reviews of LGBTQ2IA+ Canadian books, archives of the book advice column Ask Your Friendly Neighbourhood Lesbrarian, and some other queer, bookish stuff. She also writes for Autostraddle. Find her on Twitter: @canlesbrarian. Some of her old reviews, especially the non-Canadian variety, can be found at the Lesbrary.
View all posts by CaseytheCanadianLesbrarian →
This entry was posted in Asian, Black, Canadian, comics, Fantasy, Fiction, Graphic, list, memoir, Non-Canadian, Non-Fiction, Poetry, Queer, Science Fiction, Trans, Trans Feminine, Trans Masculine, Transgender. Bookmark the permalink.