Posted on April 11, 2013 by CaseytheCanadianLesbrarian

I’m a queer woman.  Also, a feminist and a white woman with some hippie tendencies who grew up on a small island on the coast of British Columbia.  Someone who can’t decide whether she likes the city or the country better.  I’m a lot of things: a lover of rich food like olives and cheese and chocolate, the kind of person who names her bicycle, and a sometimes too enthusiastic appreciator of melancholy music.  But most of all, I’m a voracious reader. And when I read, I want to read about women and I want to read about LGBTQ folks.  I especially want to hear from voices in my community who we haven’t heard enough from (I’ve mostly lost interest in cis white gay men’s stories, for example). 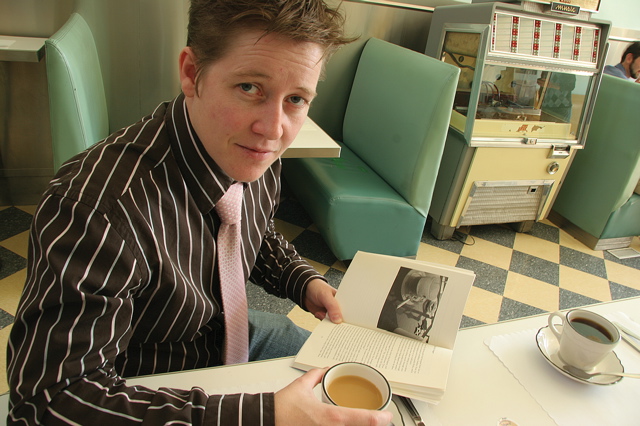 I want to see more queers like Ivan reading in diners and coffeeshops (preferrably, also reading things written by Ivan).

It’s really important to me that anyone who needs to can find our stories and read them.  I’ve been feeling frustrated for a while now about the kind of detective work that I have to do to track down new queer books and to determine whether certain books—especially those that aren’t written by queer-identified authors—have LGBTQ content.  I’m someone who focused on queer and feminist literature throughout the seven years I was an undergrad and grad student; as you know since you’re reading this here, I have a lesbian book blog.  If I have to do considerable work to find and ascertain the queer dispositions of these books, I can’t imagine the experiences of a young queer person or someone of any age just beginning to explore the queer literary world.

How to tell the queer books from the others?

What am I talking about?  I mean closely reading the synopsis of an unfamiliar book for such choice euphemistic phrases as “forbidden desire,” “love in an unexpected place,” “unusually close friendship,” “taboo love,” “boundary crossing,” or “illicit passion”—to name only a few—and trying to figure out if what they really mean is queer, or trans, or lesbian, or bisexual.  The World We Found by Thrity Umrigar, which was nominated in the lesbian fiction category for this year’s Lambda awards, was a recent reminder of this problem.  In the quite lengthy description of this novel on Goodreads, do you know what the single indicator of its lesbian content is?  This: “For Kavita, [the reunion of old friends] is an admission of forbidden passion.”  Two of the other main characters are explicitly described as heterosexual.  It’s no wonder I had no idea this book had a lesbian character until it was nominated for a Lambda.

Another queer book I’ve been reading lately and really enjoying is Licking the Spoon: A Memoir of Food, Family, and Identity; the thing is, there is nothing on the front or back cover to indicate the “family” and “identity” in the title have a lot to do with queerness and that a significant amount of the memoir deals with author Candace Walsh’s journey of exploring and discovering her queer sexuality.  In a recent conversation on Goodreads Danika at the Lesbrary mentioned another detective strategy: scanning the authors whose recommendations grace the cover of a yet-to-be-determined-queer book.  Does Sarah Waters give it a thumbs up?  Did Emma Donoghue love it?  Odds are, it’s got some women-loving-women in there somewhere.  Not even this strategy works with Walsh’s memoir, though: no lesbian favourite names there, although two writers compare Walsh’s book to straight writer Nora Ephron’s memoir Heartburn. 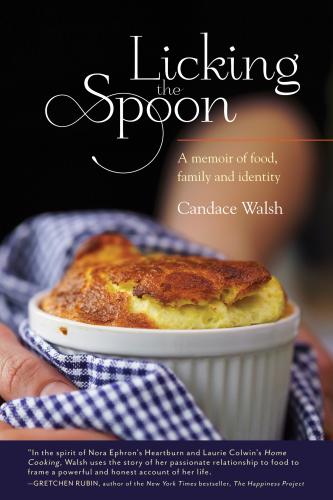 This a great memoir dealing with queer sexual identity and family by a queer author. Too bad you can’t tell by the cover.

I went through my personal collection of queer women’s books and found countless more examples of this.  I actually remember initially not buying Shani Mootoo’s first novel, Cereus Blooms at Night, thinking that although I knew the author was a lesbian, the back cover of the book didn’t make it sounds like there was a lot of queer content. (See my review and how it actually features a diverse multitude of trans and queer characters).  The only hint in the synopsis is that one male character is “vivacious.”  The back of my copy of Fried Green Tomatoes at the Whistle Stop Café actually calls Ruth Idgie’s “friend.”  Barf.  Young adult novel Hello, Groin by Beth Goobie, which centres around the protagonist’s coming out, mentions her having a boyfriend and a vague “deepest fear” that she is letting “run her life.”  I am by no means blaming the authors of these books; I assume they have little or no control over those kinds of things.  In fact, I am laying full blame on the publishing companies and their marketing.

It would have been a tragedy indeed to have missed out on Shani Mootoo’s novel Cereus Blooms at Night.

I don’t want the priority reading audience for our books to be non-queers.  I don’t want them to be palatable to straight and cisgendered people.  I don’t want publishers to have their cake and eat it too: slyly de-queer the book to appeal to cis/straight audiences and assume LGBTQ folks will figure it out and buy the book too.  As Imogen Binnie unabashedly proclaimed at a recent reading in Vancouver from her new novel Nevada, which features a trans woman protagonist: “I don’t care if straight people read it.”  I understand that literature is a very powerful activist tool and that non-queers reading about queers is a great thing.  I can see that by not proclaiming their queer content on the cover that some books are going to gain readership they might not otherwise and that this reading experience might be transformative for said non-queer people and could positively impact their interactions with queers in the future.  But that’s not as important to me as a queer person who needs queer literature finding and reading it.

Is some kind of explicit mention of LGBTQ content on the cover of a book just out of the question?  Don’t tell me it would be a “spoiler.”  It’s not a spoiler to give enough information to let the reader know if they want to read the book or not.  In fact, I want a fucking rainbow on the spine of the book.  Is that too much to ask?

Known in some internet circles as Casey the Canadian Lesbrarian, Casey Stepaniuk is a writer and librarian who holds an MA in English literature. She lives and works in the unceded territory of the Snuneymuxw First Nation (Nanaimo, BC). Topics and activities dear to her heart include cats, bisexuality, libraries, queer (Canadian) literature, running, and drinking tea. She runs the website Casey the Canadian Lesbrarian, where you can find reviews of LGBTQ2IA+ Canadian books, archives of the book advice column Ask Your Friendly Neighbourhood Lesbrarian, and some other queer, bookish stuff. She also writes for Autostraddle. Find her on Twitter: @canlesbrarian. Some of her old reviews, especially the non-Canadian variety, can be found at the Lesbrary.
View all posts by CaseytheCanadianLesbrarian →
This entry was posted in Canadian, Fiction, Ivan E. Coyote, Lesbian, Non-Canadian, Non-Fiction, Queer, Shani Mootoo, Trans, Trans Masculine, Young Adult and tagged book marketing, books, LGBTQ, literature, The World We Found, Thrity Umrigar. Bookmark the permalink.