Posted on March 4, 2014 by CaseytheCanadianLesbrarian

Kobayashi, who was born in Japan and raised in Canada, has crafted one hell of a mesmerizing novel.  It’s the kind of fascinating that you might miss, though, if you try to read it too fast; it would be too easy to miss the subtle, quiet power of this novel.  So take your time!  For one thing, it takes a while to sink into the setting of Prairie Ostrich, which is an historical novel set in rural Alberta in the 70s.  Your angle on this small town called (significantly) Bittercreek is not what you might expect: eight-year-old “Egg” Murakami is the limited perspective you get.  Egg is having a rough time.  Her teenage brother Albert died last summer, and her family are all grieving in their own way.  Her dad has secluded himself away in the barn with the ostriches he raises.  Her mother drinks whiskey at all hours of the day.  Her older sister Kathy—in grade twelve—is trying to hold the family together, and is the only one really present for Egg, who is not only trying to make sense of her brother’s death but deal with the bullies at her school.

This novel is narrated in the present tense, a strategy that is always a bit off-putting for me.  It reminded me of another amazing queer book, Dream Boy by Jim Grimsley, which also deals with grief and tough subjects and uses the present tense.  We’re so used to stories being narrated in the past.  Why do so few writers use the present tense?  I found Kobayashi’s use of it in Prairie Ostrich so interesting, because what it made so clear was that she was not offering the illusion of a safe present from which the story in the past is narrated.  You actually don’t know that the characters even survive to tell the tale.

That’s a scary thought, but this novel is concerned with death and survival throughout, and Egg’s brother’s accident is, to use an old cliché, just the tip of the iceberg.  The Second World War, both the Holocaust in Europe and the internment /work camps and forced relocation and deportation of Japanese-Canadians, haunts much of Prairie Ostrich.  Egg and her family are only living in the prairies because of the government-led ‘relocations’ of Japanese-Canadians, and her parents met while her mother was in Japan, presumably as a result of forced deportation.  The racism that fuelled these government programs is alive and well in Bittercreek, and Egg is bearing the brunt of it at school.

It’s the awful stuff of the world—racism, death, homophobia, hate, heartbreak—that Kathy wishes to shield her sister from.  The saddest part of this novel is that Kathy alters the endings of the books she reads to Egg so that everything doesn’t seem so terrible.  Egg believes that Anne Frank survived the Holocaust and is living in New York as an actress.  She believes Charlotte and Wilbur lived happily ever after.  As you can probably imagine, these are not illusions that manage to stay unbroken by the end of the novel. 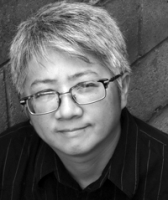 It’s not that Kathy is duping her sister, who is in fact a really bright kid, although she is kind of awkward like the ostriches that live on her family’s farm.  But she’s a lovable, nerdy kind of awkward, the kind of kid who would be different than most of the other kids even if she weren’t the only Japanese girl in her class.  It’s very interesting to witness the teenage lesbian romance through the eyes of an eight-year-old who doesn’t really get it, but at the same time intuitively kind of does.  Egg thinks her sister Kathy and Stacey are ‘best friends,’ wonders why her sister acts like a ‘gentleman’ around her friend, and can sense when things aren’t going well.  Egg’s viewpoint gives all the scary, sad stuff happening around her this hazy glow; it makes everything seem all the more awful, because from her innocent, inquisitive perspective hate and prejudice just don’t make any sense.

I highly recommend this beautiful novel!  It was just released today!  Check out Danika’s review over at the Lesbrary for more incentive.

The book launch, if you’re in the Toronto area, is March 27th at 7pm at Another Story Bookshop.

(Note: Do not read the description of Prairie Ostrich on Goodreads: it basically tells you the entire plot in a much less interesting way than the actual novel does.)

Known in some internet circles as Casey the Canadian Lesbrarian, Casey Stepaniuk is a writer and librarian who holds an MA in English literature. She lives and works in the unceded territory of the Snuneymuxw First Nation (Nanaimo, BC). Topics and activities dear to her heart include cats, bisexuality, libraries, queer (Canadian) literature, running, and drinking tea. She runs the website Casey the Canadian Lesbrarian, where you can find reviews of LGBTQ2IA+ Canadian books, archives of the book advice column Ask Your Friendly Neighbourhood Lesbrarian, and some other queer, bookish stuff. She also writes for Autostraddle. Find her on Twitter: @canlesbrarian. Some of her old reviews, especially the non-Canadian variety, can be found at the Lesbrary.
View all posts by CaseytheCanadianLesbrarian →
This entry was posted in Alberta, Asian, Canadian, Fiction, Lesbian, Queer, Rural, Young Adult and tagged Japanese Internment, Japanese-Canadian, Second World War Japanese-Canadians. Bookmark the permalink.

8 Responses to Quiet, Subtle Power on the Prairies: A Review of Tamai Kobayashi’s Novel Prairie Ostrich