A Darkly Funny and Inspiring Novel Despite Itself: A Review of Mariko Tamaki’s (You) Set Me on Fire

Posted on December 18, 2012 by CaseytheCanadianLesbrarian 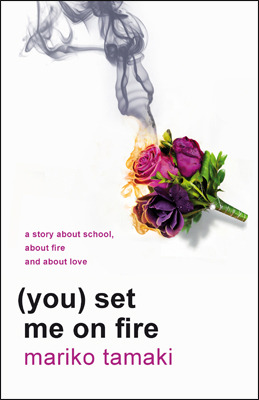 So here’s the short version of this review: I loved queer Toronto-based author Mariko Tamaki’s latest book, (You) Set Me on Fire.  If you’re not convinced by the awesome title alone that this young adult novel is worth checking out, then I don’t know—something is weird there.  Please read it.  Especially if you’re a teenager.  But even if you’re not.  Tamaki is so talented at channeling and representing the voice of a seventeen-year-old girl.  Seriously.  The entire book, told from the main character Allison’s perspective, is spot on.  Like, fucking dead on.  The whole time.  In fact, looking at the way I’m writing this paragraph, I feel like the style has rubbed off on me, which is kind of cool and shows how mesmerizing Allison’s particular voice is.  Just listen to her describe her sexuality:

I’m into girls, but I have some pretty strong reservations about this decision on my heart’s part.  For me, “lesbianism,” if you want to call it that (I hate that word), is like a kind of Tourette syndrome.  It’s like, why, given my MANY experiences with the claws and fangs of girls, would I decide to put myself on the path of pursuing them for the rest of my life?  It’s shocking to me that I could fall in love with a girl, let alone more than one girl.  Although, you know, let’s not exclude the possibility that some boy will come along and sweep me off my feet.  Boys, it seems, are just so cool and everyone wants one.  Why not me?

(You) Set Me on Fire is an exciting book that easily sweeps you into its world.  This world belongs to Allison Lee, a young woman who’s about to start her first year of college.  Allison is an outsider, to put it mildly: as she tells us, “Before college I managed to have a sum total of two ‘friends,’ whose acquisition and (temporary) loyalty both required some form of bribery/sacrifice”; one of these girls is Anne, Allison’s first love whose affections she initially secured by getting her the anti-anxiety meds Anne’s doctor wouldn’t prescribe her.  Not surprisingly, Allison’s romance with Anne is short-lived.  This catastrophe, along with two close encounters with fire (one is a ceremonial ‘moving-on’ backyard bonfire that gets a little out of control), make Allison glad for the fresh start college offers her.

As you’ve probably guessed, however, things aren’t all peachy keen for Allison after she settles into her dormitory.  Despite the fact that she’s scarred both on the inside from Anne and on the outside from having set herself on fire (twice), Allison leaps headfirst into a friendship with a girl named Shar, whom readers can tell from miles away is bad, bad news.  Shar and Allison meet one night when Allison helps Shar find the lighter she’s drunkenly searching for in the grass.  Allison spots it in a pile of puke (true to most first year university experiences, there’s a lot of drinking and puking in this book).  I’ve read a few other reviews where readers said they found a hard time understanding what Allison saw in Shar, but I found it totally believable: Shar is that dark, sarcastic, confident, too-cool-for-school girl that someone like Allison, stumbling around looking for something to give her life meaning, would be undeniably attracted to.

I use the vague phrase ‘attracted to’ purposely; Allison clearly has more-than-friendly feelings for Shar, but that’s not the only reason she’s so drawn to her.  Their relationship is less romantic or sexual than it is a toxic friendship.  I thought it was really brilliant how Tamaki investigated the complexities of female relationships, as well as those of sexual identity.  In addition to her hypothetically contemplating dating a boy (even though she doesn’t appear to have ever had feelings for one), Allison gives us this piece of wisdom after a night of drunken fooling around: “for those of you who think girls who sleep with girls have it any better because they’re more familiar with the equipment, let me just say, that’s fucking stupid.  It’s like saying having hair makes you a hairdresser or having a body makes you a masseuse.”  Brilliant, right?

Darkly funny, (You) Set Me on Fire is the kind of novel that’s going to make you cringe, laugh, and cry all at the same time.  It’s the kind that makes you look a little crazy when you starting talking to yourself, saying things like: “Oh my god that character just cut her hair and it’s a faux hawk?  Where is your gaydar Allison?  Come on!”  While there’s no perfect resolution to Allison’s journey, I found the ending really satisfying as well as fitting for the rest of the book.  I was a little unsure how things were ever going to get better for poor Allison, given in one of the last scenes this happens:

Her friend/enemy/crush/sometime makeout partner Shar ditches her at a party for some guy who has a belt buckle that reads “titty inspection badge.”  Ouch.  Allison tells us:

The drill for people like me in situations like these is that we’re supposed to leave.  That’s the unwritten rule.  We’re supposed to get out of the way.  It’s not just about being a lesbian, obviously.  I’m pretty sure this happens to straight people too.  It seems to happen to lesbians a lot though.  Because we’re such idiots, I think.

Hey, at least she knows she’s a lesbian now.  There’s some hope there, at the very end, though, and while the novel for the most part makes this twenty-something glad she’s left her undergrad behind, there was a small part of me that looked back at that time period of your late teens, with all those seemingly endless possibilities ahead of you, with a little bit of nostalgia.  I mean, Allison’s not sure she’s going to become anything or find love or any of that; but as she tells us: “Hey.  You never know.”

Known in some internet circles as Casey the Canadian Lesbrarian, Casey Stepaniuk is a writer and librarian who holds an MA in English literature. She lives and works in the unceded territory of the Snuneymuxw First Nation (Nanaimo, BC). Topics and activities dear to her heart include cats, bisexuality, libraries, queer (Canadian) literature, running, and drinking tea. She runs the website Casey the Canadian Lesbrarian, where you can find reviews of LGBTQ2IA+ Canadian books, archives of the book advice column Ask Your Friendly Neighbourhood Lesbrarian, and some other queer, bookish stuff. She also writes for Autostraddle. Find her on Twitter: @canlesbrarian. Some of her old reviews, especially the non-Canadian variety, can be found at the Lesbrary.
View all posts by CaseytheCanadianLesbrarian →
This entry was posted in Asian, Bisexual, Canadian, Coming-of-age, Fiction, Lesbian, Mariko Tamaki, Queer, Young Adult and tagged books, college, literature, Penguin Canada, university. Bookmark the permalink.

8 Responses to A Darkly Funny and Inspiring Novel Despite Itself: A Review of Mariko Tamaki’s (You) Set Me on Fire